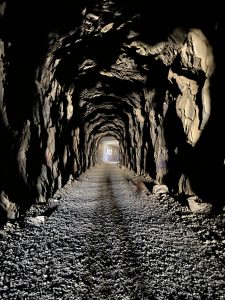 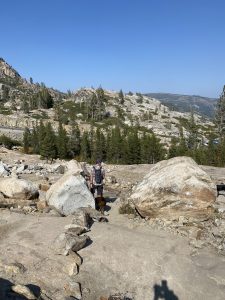 Sure, it’s changed. It’s been gentrified; the town’s rough edges inevitably smoothed over by time, commerce and population growth. Nevertheless, the old-timey, slightly ramshackle ambiance of Truckee still shines through. Maybe it’s the trains running through the middle of town, stopping for passengers, as well as stopping traffic, as they have for over 150 years. Or it could be the mountains surrounding Truckee, with the echoing history of years past continuing to bounce from peak to peak. Whatever the explanation, Truckee is worth a visit.

If a shopping trip calls, then Truckee’s main street will fill the bill. Stores stocked with appealing merchandise abound, and a just-right souvenir to take home is certain to be discovered.

With over 50 local restaurants, visitors won’t go hungry. It’s a sure bet there will be a dish to satisfy every palate and every wallet.

From skiing and ice skating in the winter to biking or hiking the well-maintained Truckee River trail in the summer, everybody from the youngest to the very senior citizen will find an activity to suit any time of the year.

Of course, no one can visit Truckee without stopping by the Donner Memorial. It doesn’t take a big imagination to be sympathetic to the Donner parties’ awful predicament.

The Railroad Museum is right in the middle of downtown. There, you learn about the building of the railroad. You can see and appreciate the struggle and work it took to lay tracks around and through the imposing mountains that loom just outside the entrance door. Outside of town, there are even abandoned railroad tunnels to explore.

Near the tunnels are petroglyphs. Symbols carved into our native stone, proving that these mountains have been known to many groups of people for thousands of years.

As with everywhere, the town of Truckee has had its share of tragedy. Although it was mostly Chinese workers who laboriously laid the tracks for the Western portion of the Transcontinental Railroad, the Chinese were not welcome as permanent residents in the area.

In 1876, three hundred residents of Truckee formed a chapter of the Order of the Caucasians.  Seven members of that Order set fire to two cabins full of Chinese woodcutters, shooting at the woodcutters as they ran out of the flaming cabins. One Chinese man was killed. Then in 1886, fourteen hundred Chinese inhabitants of Truckee were expelled. As part of the campaign to rid them from Truckee, any local business that did business with the Chinese was boycotted.

Truckee has been through a few name changes. First called Gray’s Station, then Coburn’s Station, the railroad’s founders finally dubbed the community Truckee. They named it after a helpful, amiable Paiute man who often greeted early travelers with the phrase “tro-kay” which, in Paiute, means “everything is all right.”  It was originally thought that he was announcing his name.

Choosing that particular title for the community may have been more prophetic than expected. Today, despite the crowds, despite the traffic, in Truckee, with hard its times behind, everything is all right.

Related Articles
Uncategorized The Washoe The word Washoe means “people from here,” which is an apt description for a group of people who have called this area home for more than 6,000 years. Many generations have lived on and with this land, each gathering knowledge and wisdom to pass forward. It’s no wonder that The Committee on Energy and Natural […]
Uncategorized TREE WHISPERERS Remarkable research by determined scientists and foresters has proven that trees are more than sticks of wood just waiting to be cut down to build houses. Smart people have been working hard to truly understand trees; how they grow, how they interact with each other, how a forest works, and how humans can help. Dr. […]
Uncategorized BY ANY OTHER NAME Incline village was named after the incline railroad that once lifted heavy Tahoe timbers 1,400 feet up the steep mountain side, beginning their long journey to the Comstock mines. What about the other communities around Tahoe’s north shore? How did they get their names? Kings Beach, for example. Many stories say that this little corner […]