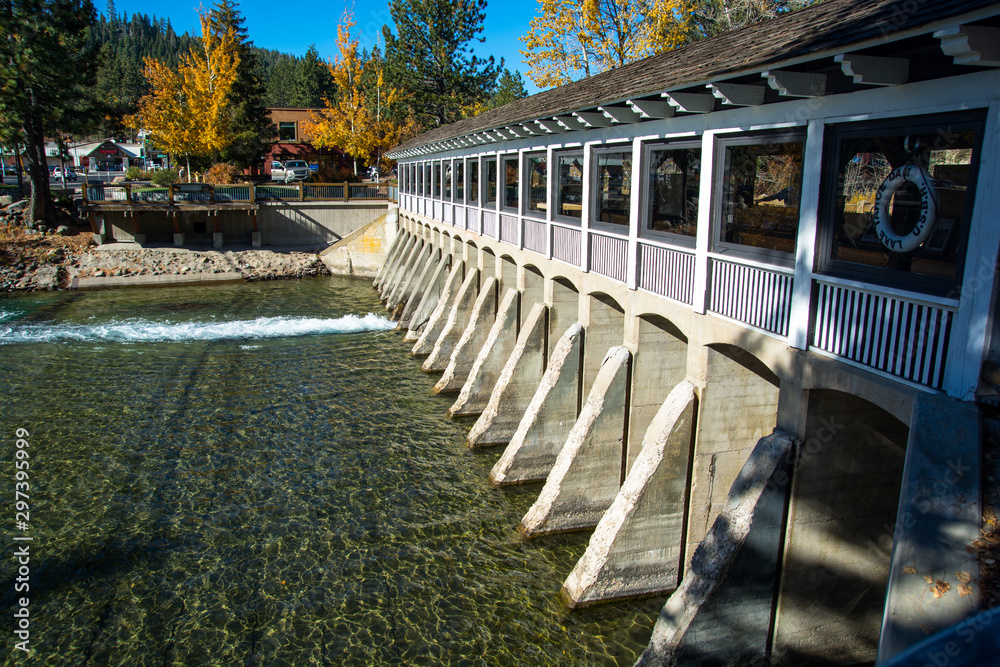 Occasionally, when reading about some early plans for Lake Tahoe, the realization hits that it is a slight miracle we have a lake at all.

For instance, in 1865, a San Francisco based engineer, with the elegant name of Alexis Waldemar Von Schmidt, created the Lake Tahoe and San Francisco Water Works Company. Mr. Von Schmidt also acquired a half section of land near the Truckee River outfall, along with the rights to five hundred cubic feet per second of Lake Tahoe’s water. Yes, you read that right.

Von Schmidt planed to supply the city of San Francisco with water from Lake Tahoe. Beginning at the Truckee River outfall, a series of aqueducts would channel water through the Sierras until reaching the north fork of the American River, and then from there, on to San Francisco. However, in 1870 the California Legislature, spurning Von Schmidt’s application, granted Mark Hopkins and Leland Stanford’s Donner Lumber and Boom Company, the right to build a dam at the Lake’s Truckee River outlet — which they did. However, Mr. Von Schmidt and his grandiose plan have not been completely forgotten. A roadside plaque mentioning him stands near Alpine Meadows Road on Highway 89.

The first small lumber and rock dam developed into the dam you can tour in Tahoe City. And a very informative self-guided tour it is. You learn that the existing dam was completed in 1913 and modernized in 1987; that the dam controls only the top six feet of Tahoe’s water; that while 63 streams flow into Lake Tahoe, the north-easterly flowing Truckee River is the only outflow of Tahoe’s water. Most importantly, you learn why Fanny Bridge is so named.

In 1915, the dam, along with 14 acres surrounding the outlet, was purchased from the Truckee River General Electric Company by the U.S. government for $139,500.00. The dam is now owned, operated, and maintained by the US Bureau of Reclamation.

Furthermore, Lake Tahoe’s sole dam is not just a local landmark. In 1981 it was listed on the National Register of Historic Places.

A visit offers more than just dam information. There are picnic tables under the pines. Tahoe City’s swimming beach is a short walk north of the dam, and a small museum with beautiful examples of Native American basketry, sits just south of the dam.

A dam visit may prod your curiosity. Now that you’ve seen the Lake’s ending, you may want to discover part of its beginnings. The Upper Truckee River empties into the Lake in South Lake Tahoe. It’s not hard to find, and has an easy 1.5 mile, mostly flat, but sometimes muddy trail waiting to be explored. The Upper Truckee River loop, was described by one visitor as ‘a lovely ramble along a babbling brook.’

Who can resist that kind of description? Enjoy your walk, but don’t forget the bug spray.

Related Articles
Uncategorized A Sierra Nevada Tale It seems like an early settler named Sierra Nevada would be well known around these parts, but the opposite is true. Few have heard of her. Born in1854 in Nevada City, Sierra was four years old when her parents, John and Mehitable Phillips, decided to become inn-keepers. The little family moved to a property about two […]
Tahoe and Vicinity Forest Fires – Before and After For years, fires in our forests have been extinguished as soon as possible. That practice, when combined with warmer temperatures, and drier conditions, has made for larger and more intense fires. In fact, new words have been coined to better describe the immensity of recent fires; a megafire is being used to describe 100,000 acre […]
Tahoe and Vicinity A Spring Journey In 1911, Tahoe Tavern, an elegant Tahoe City hotel, hoping to drum up business after a record breaking snow-bound winter, offered a 3-foot-tall silver trophy to the driver(s) of the first car to complete a spring journey from California to Tahoe City. Fortunately, snowbrains.com posted two photos from that race. One black and white image […]